Cryptocurrencies May Shine If Inflation Persists

We are all getting a pretty good understanding of scarcity. When you combine it with demand you get $50 steaks and used cars worth more after 5 years and 40,000 miles than they were right off the lot. We are all hoping the demand for goods and services will fade away as people return to work, and supply chains get fixed, but the lessons of scarcity are beginning to emerge. One of those lessons is massive money printing leads to inflation.

At the heart of Bitcoin’s (BTC) business model is a tripod of competing objectives: decentralization, network security, and scarcity. Crypto detractors point to the growing list of defects with Bitcoin. Here are the most popular among them:

But no one is really dissecting BTC’s scarcity model and how it is significantly different than any other commodity. 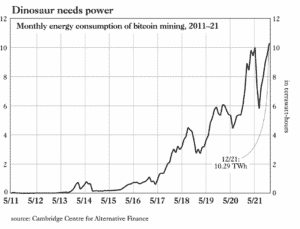 Since I am not an expert on crypto, I reached out to Will Mason from Upswing, LLC who has been involved with all manner of crypto for years. Mr. Mason observes that BTC scales exponentially, not in a linear manner. This means it does not take 3x the energy for BTC miners to process 3x the volume of transactions. This is what people mean when they talk about a “network effect.” But at the heart of Bitcoin’s business model is a huge investment by the miners who validate its blockchain in energy and computing power.

The other thing BTC provides is security. As a decentralized exchange the most important elements of the BTC design are independence and security. A proof of work standard for its blockchain based on a worldwide network of completely independent, but competing, “miners” so far has been incorruptible. That may become even more important as worldwide financial systems based on central authorities or middlemen become tarnished by cronyism, insider trading, political influence, and miscalculations.

It takes a huge investment by each node in the validation network to safeguard the blockchain. Those “nodes” are entrepreneurs running small businesses for profit.

Miners Have a Golden Goose

I looked at the financial statements for three publicly traded miners, Bitcoin Farms (TSVX:BITF), Bit Mining Limited (NYSE:BTCM), and Hut 8 Mining Corp (TSX:HUT). All three had pristine balance sheets with total assets respectively of $324.0m, $293.0m and $651.0m and Shareholders Equity of $281.0m, $202m and 629.0m, respectively. In all cases net debt (cash less debt) was positive. Each has grown substantially since inception in the 2016-2017 period.

My bottom line is these crypto miners are running nice, independent, small businesses with strong balance sheets, good cash flows, and growth in revenues and net income. It seems highly unlikely to me they would conspire to corrupt the security of their golden goose. Their investments in infrastructure and energy underpin the blockchain’s security.

It also appears these miners can purchase energy on long term contracts and leverage those known costs in the fees they charge for validating the blockchain.

Volatility Is Trade Off for Scarcity

Every detractor points to BTC’s volatility as another significant flaw in the BTC design. Because its constitution limits the amount of BTC that can be issued to 21.0 million coins, this payment system is constructed on scarcity.

Currently, 18.9 million BTC have been created. However, a much smaller amount actually trades. It is estimated by Glassnode Insights in a study done in December 2020 entitled “78% of The Bitcoin Supply Is Not Liquid” written by Rafael Schultze-Krafthat, the BTC in circulation is much smaller- maybe something like 4.0 million. The chart below illustrates the dilemma. The blue portions are accounts with zero activity in the  155 days prior to the report: 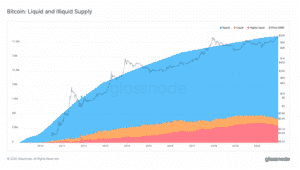 Think about the analogy to gold. What if 78% of the gold in circulation would not trade because governments, institutions and individuals hoarded it as a universal store of value? Also change the gold mining dynamic to prohibit any new commercial mining of gold regardless of price. What would happen to gold prices? The long-term trend would be great, but the trading dynamics would be like a thinly traded equity market where liquidity to buy or sell a large position is only achieved at a sizeable discount or premium. This is one reason you are beginning to read about BTC not being a suitable institutional asset class. It is hard to trade in and out of it without significant gyrations in price.

Accordingly, asset managers should change their analogy that BTC is “digital gold.” With 90% of the world’s supply already mined isn’t it more like beachfront real estate in Miami? How does beachfront real estate sound right now as a hedge against inflation? Maybe BTC is really demonstrating why its creators introduced it in 2009 with a scarcity model as a hedge against the miscalculations of centralized finance?

Tightening Its Own Noose

A Greyhound In Your Future?

A return to normal travel protocols is creating some surprising twists. Based on my family’s experience with airline travel this spring here are four new rules for domestic airline

Wait until people start getting their 2022 real estate property assessments and their new real estate tax bills. After decades of small increases in property taxes, state and local

A new armory of weapons for punishing international transgressions or restoring global economic order has recently been displayed. Whether it is economic sanctions imposed by the US and the

A Fink May Be Voting Your Index Shares

Charlie Munger may be approaching 100 years old, but he is still sharp, and, more importantly, he is independent of the big money influences on Wall Street. Among that

Cryptocurrencies May Shine If Inflation Persists

We are all getting a pretty good understanding of scarcity. When you combine it with demand you get $50 steaks and used cars worth more after 5 years and

Are You Feeling Wealthy, Punk?

Detective Harry Callahan, Dirty Harry, was played by Clint Eastwood in a series of movies beginning in the 1970’s. As a detective for the SFPD Dirty Harry was highly