Howard Marks is one of my favorite investors because he has a deep value bias and the discipline not to abandon it. Warren Buffet says he always opens any communication from Howard Marks first so why would I be different? When he writes or speaks, I listen, not so much because he says what I believe, but rather because he is so often right.

Mr. Marks is one of the founders of Oaktree Capital. It was organized in 1995 with a specialization in distressed debt. He rose to prominence in 2008 when he raised a $10.9 Billion distressed debt fund and deployed it during the ensuing reorganization of distressed debt products held by banks and other forced sellers during the Great Financial Crisis. He sold his firm in 2019 to Brookfield Asset Management. Oaktree currently manages $163 Billion of assets and has more than 1000 employees in offices all over the world.

He recently published an investment memo entitled “Sea Change” which is available for all to read on the Oaktree website.

Here is the opening line of this “must read” financial guidepost:

“In my 53 years in the investment world I have seen a number of economic cycles, pendulum swings, manias and panics, bubbles and crashes, but I only remember two real sea changes. I think we may be in the midst of a third one today.”

According to Mr. Marks t last sea change was a 40-year run where the stock market compounded at more than 10% annually as a result of falling interest rates, technological advances, and a new credit mentality spawned by Michael Milken. The junk bond era introduced a whole swath of riskier investments as a perfectly acceptable asset class. In turn, this super cycle in non-investment grade debt allowed private equity to emerge as an acceptable institutional asset class and supported a boom in corporate acquisitions.

In 1976 when I started my career the only liquidity paths for a growing private company were “bootstrap”, self- financed, acquisitions and initial public offerings. Today there is better liquidity for small private companies in the merger markets than small publicly traded companies on the NASDAQ.

This 40 year decline of interest rates rewarded leverage by constantly lowering the cost of refinancing assets that were growing in value. Leverage becomes a magic multiplier for equity returns in almost all asset classes. With no signs of inflation the “Wimpy Economy”– I will gladly pay you Tuesday for a hamburger today”– was a golden age of economic prosperity. Here are the conditions that existed in the last period of this golden age where getting properly compensated for risk was almost impossible: 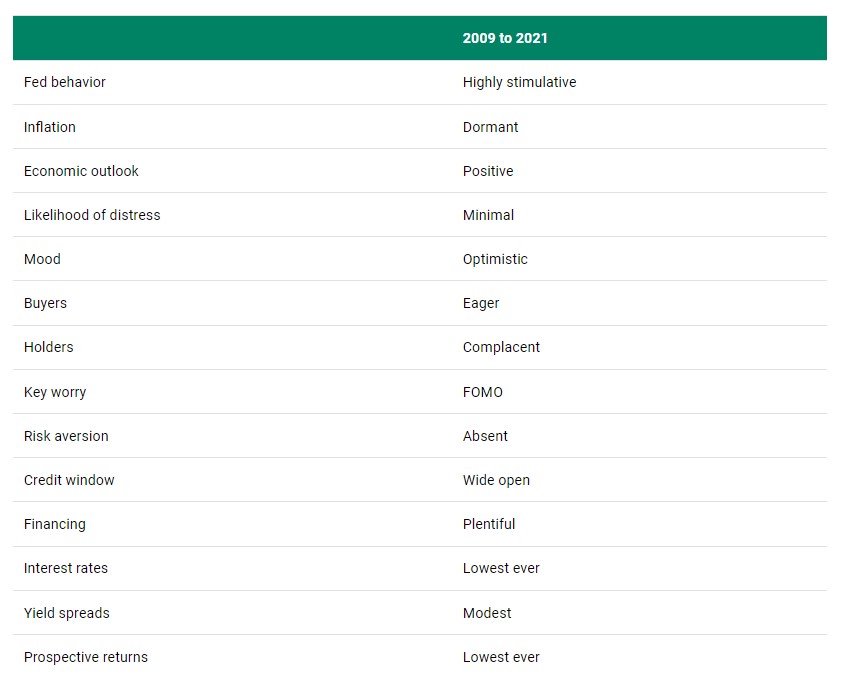 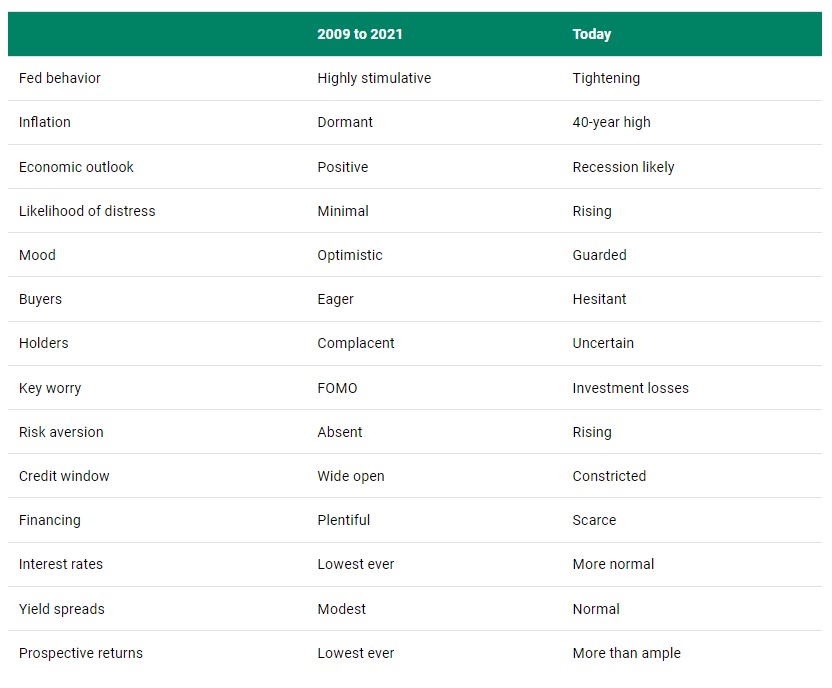 I encourage all of our readers to spend some time on the Oaktree website with special time for this insightful view of where we are. Most of all I value the humility Mr. Marks shows in offering up this “Sea Change” for all of us to read. Unlike most of the talking heads you see on TV and the Internet and the endless advice you receive from almost every financial advisor predicting the future, Mr. Marks ends his letter with a statement of personal responsibility:

“As I have written many times about the economy and markets, we never know where we are going, but we ought to know where we are. The bottom line for me is that, in many ways, conditions at this moment are overwhelmingly different from- and mostly less favorable than- those of the post GFC climate described above (2010-2019).”

Mr. Marks has a pretty good track record of navigating Oaktree’s investment performance and I trust he knows exactly where we are today. In the investment world that clarity is rare, and we should all treat it as a great gift from which we launch our own strategies.

The above commentary is for informational purposes only. Not intended as legal or investment advice or a recommendation of any particular security or strategy. Information prepared from third-party sources is believed to be reliable though its accuracy is not guaranteed. Opinions expressed in this commentary reflect subjective judgments based on conditions at the time of writing and are subject to change without notice.

There Is Nothing Artificial About This Intelligence

The hottest reservation in America is not the 2023 Superbowl. Rather it is getting time on ChatGPT to experiment with artificial intelligence. I tried and tried and even put my name on a

Howard Marks is one of my favorite investors because he has a deep value bias and the discipline not to abandon it. Warren Buffet says he always opens any

Happy New Year. CW Industrial Partners hopes 2023 will be healthy, prosperous and enlightening. An appropriate theme for the first blog of the year is financial literacy… or maybe

I organized a family World Cup pool which I assumed I could win. After all I played soccer in high school and college and know all the big names

Crypto’s In The Upside Down

Like the Netflix hit sci-fi series “Stranger Things” where governmental test labs inadvertently create a new volatile dimension called the “Upside Down” so, too, have crypto markets taken on