Tightening Its Own Noose

Quantitative easing was pure honey. Buying low yield, new issue Treasury bonds, buying government mortgage-backed securities, and providing overnight liquidity with yield through a repo facility were the important tools for 21st century central banks. They worked beautifully and provided liquidity and momentum for just about every asset class on the planet. They were also highly pleasing for politicians who always advocated for and got more, especially in election cycles.

The aftermath for the US Federal Reserve is a $9 Trillion balance sheet consisting of low yield-ing Treasury Bills and Bonds and mortgage-backed securities. From a pure investment standpoint these additions to the Fed’s balance sheet were not motivated by profit making for the US taxpayers or any notion of balance sheet integrity.

In his latest letter to investors, James Grant of Grant’s Interest Rate Observer in his April 29, 2022 publication “Examine The Federal Reserve” points out that the Fed’s balance sheet would not withstand any bank solvency test where even 20:1 leverage is considered dangerous:

“Few would choose to navigate a bear bond market with $8.5 trillion’s worth of fixed-income assets leveraged 217:1, but the Federal Reserve is not like the rest of us. Its rules are not our rules, and its ways are not our ways. The Bank of Powell suffered a $500 billion loss in the first quarter, a new analysis shows, swamping its $41.2 billion stub of capital.”

The irony of the inflation the Fed delivered is it, too, now needs to be tamed, especially in an election year. The tools to tame it, however, are much like a ringmaster with a stool and a whip facing a starving tiger.  The easy money inflation beast is used to being fed and reacts poorly when deprived.  Inflation means unaffordable food, shelter and energy prices for those who can’t pay and a theft of buying power for savers who can. But those current-period casualties are just footnotes to the wealth creation magic from 15 years of quantitative easing.

A Gallows Rope Below His Chin

If central banks raise rates now they trash their highly leveraged balance sheets comprised of low-yielding debt. In an election year, inflation-fighting cannot mean an embarrassing loss on a Fed’s portfolio of debt no one else would buy. The $500 Billion balance sheet write-down would become much worse in a rising interest rate environment.

In my opinion Mr. Powell is standing on a rickety stool with a gallows rope below his chin. If the Fed cares about its own neck it is unlikely to tighten its own noose by raising rates or realizing losses by selling assets.

This sentiment is echoed by a recent Wall Street Journal article, “Fed Prepares Double-Barreled Tightening with Bond Run Off” written by Nick Timiraos and published on May 1.  I guess the theory is you will remove liquidity and not suffer realized losses if you just run off the early maturities of mortgage and government securities. This way the Fed removes liquidity and at the same time avoids realizing embarrassing losses that would make meme company investors look smarter.

Who needs to raise interest rates if you have put the easing engine in reverse and there are no immediate backfires? Mr. Timiraos points to a Piper Sandler analysis of putting the liquidity engines in reverse:

“Economists at Piper Sandler estimate the Fed will shrink its balance sheet by around $600 billion this year and $1 trillion next year. Officials are talking about shrinking holdings by around $3 trillion over the next three years, compared with just $800 billion between 2017 and 2019.”

I am a little suspicious about this runoff magic. First, as Mr. Timiraos points out, the Fed’s mortgage-backed portfolio is comprised of longer term mortgages. With home mortgage rates having risen recently, there is little incentive for mortgage refinancing which would provide market-tested liquidity for the Fed.

The Fed owns about 32% of the government mortgage-backed market and I would bet it has very few mortgages with interest rates above the current range of 4.5%-5%. If it can’t sell them and they won’t be refinanced, the best strategy is to jawbone them. 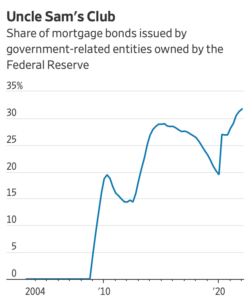 So, if it is unlikely you can remove liquidity by running off mortgages, how about Treasury Bills and Notes? The Fed has a pretty big share of the Treasury securities issued since 2019: 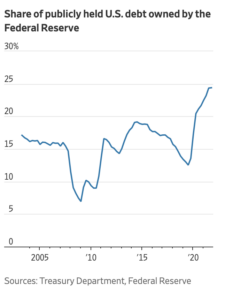 However, most of those securities are also losers on a mark-to-market basis and I am pretty sure Mr. Powell won’t rattle the stool when he can restore the Fed’s solvency by absolving itself of its repayment obligations to the US Treasury. Mr. Grant points out a little-known bookkeeping privilege of the Federal Reserve in his latest newsletter:

“The Fed can’t print capital, and it no longer need try. The taxing power of the United States has stood behind it these past 11 years, a little-known fact that came to light in a footnote to the H.4.1 form of Jan. 6, 2011. The note said that any future deficit would be swept into a journal entry as a liability to the Treasury rather than being debited from the Fed’s capital, such as it is. In effect, a loss-making Fed would earn its way back to respectability, if not solvency, by suspending its normal dividends (Grant’s, June 3, 2011). There’s a reason why the knees of the chairman of this supremely leveraged institution are rarely seen knocking together.”

All of this makes me certain of several themes:

There Is Nothing Artificial About This Intelligence

The hottest reservation in America is not the 2023 Superbowl. Rather it is getting time on ChatGPT to experiment with artificial intelligence. I tried and tried and even put my name on a

Howard Marks is one of my favorite investors because he has a deep value bias and the discipline not to abandon it. Warren Buffet says he always opens any

Happy New Year. CW Industrial Partners hopes 2023 will be healthy, prosperous and enlightening. An appropriate theme for the first blog of the year is financial literacy… or maybe

I organized a family World Cup pool which I assumed I could win. After all I played soccer in high school and college and know all the big names

Crypto’s In The Upside Down

Like the Netflix hit sci-fi series “Stranger Things” where governmental test labs inadvertently create a new volatile dimension called the “Upside Down” so, too, have crypto markets taken on