After decades of globalization where manufacturers expanded supply chains to access low labor cost countries like China and Vietnam, manufacturing is coming home. Here is a chart from The Daily Shot showing China wage advantages versus the US have declined: 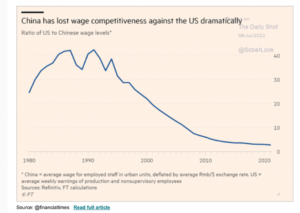 According to a recent article in Bloomberg titled “CEOs Start to Turn Supply-Chain Reshoring Talk Into Action” by James Murray on July 6, 2022 US manufacturers are beginning to act on onshoring strategies: 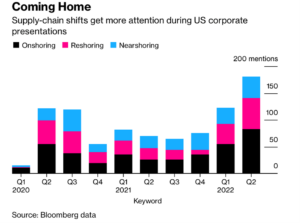 New supply chains are being established along lines of geopolitical self-interest as well as labor costs and just in time requirements.

Russia’s invasion of Ukraine and China’s expansionist military exercises in the South China Sea have caused natural trading partners like Australia to seek alternatives. Nordic countries are joining NATO. African countries are lining up with China after a decade of trade and infrastructure investment under China’s Belt and Road strategy. Even despotic dictators like Nicholas Maduro in Venezuela  and Mohammed bin Salman Al Saud of Saudi Arabia are being courted by leaders in the Americas because they have oil. Here is a chart from “The Daily Shot” showing partner trading preferences: 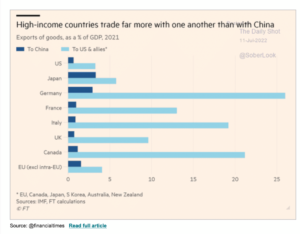 New dance partners mean new strategies, principal among which is U.S. manufacturers pulling back far-flung supply chains in favor of domestic self-sufficiency. Here are two charts from “The Daily Shot” showing where the movements are coming from and what industries are affected: 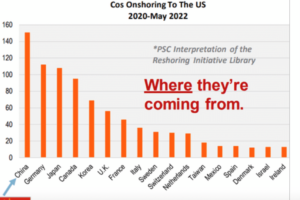 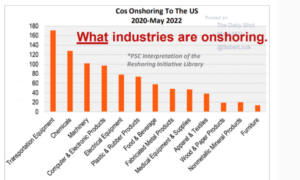 It is not hard to imagine three spheres of influence and a few Renegades:

The new financial order will also try to wean itself off the USD as the reserve currency, but it is hard to imagine oil being priced and settled in in renminbi, rubles or yen? A digital currency for domestic China, however, is a virtual certainty and that monetary system may be imposed on China’s belt and road partners and countries it annexes.

At the same moment there is a shift in supply chains back to the U.S., there is also a historic currency imbalance with major competitors like Japan and China. The strong USD will hurt re-shored manufacturers and favor countries like Japan and China with historically cheap currencies. Here is a chart from Xe.com showing the dramatic appreciation of the USD versus the Yen:

Real pain is being felt by debtors who have repayment obligations denominated in U.S. dollars like Turkey and Chinese property developers. Also, the strong USD is a crippling problem for weak currencies trying to purchase inflated oil at historic strong dollar conversion rates. Many countries may be clamoring for a new economic order.

Trade and interlocked supply chains with Russia and China, countries that now are considered renegades, have provided decades of mutual advantage. Economics aside, worldwide nationalism is now increasing the risk of global conflict. Peace and prosperity are bedfellows and the last 30 years of interwoven trading and currency harmony may not survive the new financial order.

There are many lessons from the 1970’s and 80’s “Big Inflation” about interpreting reported financial results to determine if a public company is doing well or not. One of

After decades of globalization where manufacturers expanded supply chains to access low labor cost countries like China and Vietnam, manufacturing is coming home. Here is a chart from The