After travelling to Scotland this Fall I was surprised by the conversion rates into British Pounds. Meals, lodging, beer and even golf balls were much cheaper than 2021 when this trip was first planned. Somehow this did not make sense given all our domestic problems.

What about our rising interest rates, record amounts of debt, scarcity of components, labor shortages, rising gasoline prices, surging home prices, unaffordable groceries and McDonalds for two costing $20.00? All of this feels pretty bleak compared to 2019. But when you think about currencies you have to suspend logic and simply remember it is great to own the best house on a bad street.

It is all relative and when oil is priced in US dollars and safe haven domestic debt is yielding 3%, the world wants and needs dollars. Emerging market debt is typically denominated for repayment in US Dollars. If you live in Sri Lanka and you owe creditors $10.0 million US Dollars and you only have  rupees to convert, the cost of repaying that debt has almost doubled. If you are a member of the European Union the price of oil has nearly doubled from early last year, the price of coal has almost quadrupled and and the price of natural gas has risen seven fold. Part of this escalation is scarcity, but part of the inflation is the cost of buying dollars to pay for oil. Here is a chart that shows the relative value of worldwide currencies.  Notice that almost all currencies have weakened against the dollar. 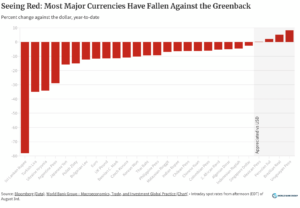 It may feel like we have an endless number of economic problems, but the Chinese, Europeans, Brazilians, Argentinians, Sri Lankans, Egyptians, and Indians are really trashed by the dramatic rise in the value of the USD versus just about every currency other than Switzerland and Canada. Every emerging nation needs credit but underwriters demand payment in endlessly appreciating dollars. Here is a chart that shows how countries that trade with the US economies have fared. : 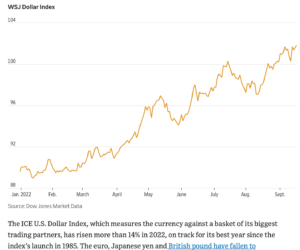 A good case study is Japan which imports oil and food. One year ago it took 115 Japanese yen to buy $1USD. Today it takes about 145 yen to buy $1USD. As a consequence, a barrel of oil that used to be imported at $70/bbl is now $84/bbl for a 22% increase. As you add the effects of inflation, the story for importers who are not defending their currencies is bleak and getting worse.

The world needs the US dollar to fall like a brick to relieve debtor nations, reduce the cost of oil and electricity and imports of food. What it may get instead is American tourists who want a cheap vacation to places they never could afford.  That threat may motivate Japan and other nations choosing a weak currency policy to make an abrupt change.In fact, Bank of Japan just announced it would support the yen for the first time since 1998.It must fear the tourist invasion.

Having the US dollar as the world’s reserve currency was much more palatable when the dollar was weak and getting weaker. I don’t think anyone could have predicted the massive swing in sentiment and relative value as the Fed began to abandon quantitative easing and started to raise rates. It is ironic that the strong dollar makes our exports quite expensive except for energy inflation which we have exported quite effectively without other countries having any choice. This will be remembered.

There are many lessons from the 1970’s and 80’s “Big Inflation” about interpreting reported financial results to determine if a public company is doing well or not. One of

After decades of globalization where manufacturers expanded supply chains to access low labor cost countries like China and Vietnam, manufacturing is coming home. Here is a chart from The